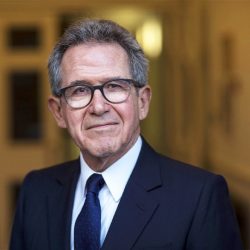 Chair, Aldermen, Sheriff, Chief Commoner, Ladies and Gentlemen. It is a great pleasure to be here with you this evening and to respond to the toast on behalf of the guests.

I am always impressed by the remarkable range of activities that are undertaken by the City of London Corporation, but the real impact of the City is felt far beyond this historic centre, across the country and around the world. The City matters and it will continue to matter, particularly as we emerge from a pandemic which has tested the strength and resilience of so many institutions on which we rely.

Those institutions are about to be tested further. I am sure that many of us here look at the world today and find a rather large number of things to cause concern. Inflation seems to have made a comeback, and Europe is once again worrying about security on its eastern border. Energy prices are high and rising; climate change is changing the way we live and do business; and the signals being sent by ESG investing appear to be reshaping financial markets. I want to make four very brief points about some of these trends and what they might mean for institutions like yours.

My first point is about the global supply chain crunch which is affecting the whole economy, but which is having a particularly acute impact on the energy sector. Relatively poor returns and pressure from investors have perhaps contributed to a historic decline in fossil fuel investment, but we still rely on hydrocarbons to supply more than 80% of the world’s energy1. So, it should come as no surprise that the release of pent-up demand has led to the highest oil price since 20142, and the highest ever natural gas price in Europe3. I believe it will take more than a few months to moderate these prices and more than few decades to do away with an energy system that has been built over more than two centuries.

High energy prices could have important implications for efforts to address climate change – my second point this evening. When oil prices were last in the region of $100, companies diverted capital away from their nascent renewable energy businesses and put it back to work in hydrocarbons, in pursuit of a return. They maintained a rhetorical commitment to renewables, but in practice did very little. A lot has changed since then, but the incentives to maximise value in the short term are still overwhelming, and I fear that the natural environment does not stand a chance – unless protecting it is the only thing preventing a company from breaking the law. This is why I have argued that oil and gas companies should be bolder in separating low-carbon and zero-carbon activity from their fossil fuels business. It would help investors to allocate their capital more efficiently, and make clearer the true long-term value of the low-carbon businesses embedded within oil and gas companies.

But when it comes to climate change, we mustn’t lose sight of the bigger picture – my third point this evening. Decarbonisation needs to take place across the whole economy and it is something that needs to be done by all of us, not just by oil and gas companies, because everything relates to everything else. Nothing exists in isolation. That is why annual investment in climate solutions across the entire value chain needs to rise from its present level of just over $1 trillion, to $3.5 trillion on average over the next decade. As you all know, investments like that can only come from the private sector, facilitated by public policy that creates incentives and reduces risk, and supported by Science-Based Targets against which progress is measured and leaders held accountable. But leadership in this area has so far been poor. A recent global report found that just 20 per cent of companies have made some sort of net zero commitment, and that less than two thirds of those commitments are science-aligned. Evidence suggests that just 10% of companies with a net zero target have a plan for delivery. 4 The current pace of change is not fast enough for us to be confident of reaching Net Zero by 2050.

I am happy to argue, however, that failure is not inevitable – my fourth and final point.

I recently recorded a short podcast series called Net Zero and Beyond, looking at the people and companies delivering practical solutions to the many problems of climate change. We talked to leaders in sectors such as aviation, steel, energy, transportation and, surprisingly, wine production. There were no easy answers on which everyone agreed, but what united these people was a belief in their ability to make a difference. As consumers, they are demanding more information about the goods and services they consume, so that they can make informed, low-carbon choices. As corporate leaders, they are putting their shoulder behind laws and regulations that apply to everyone, in order to create a level playing field. As shareholders, they are avoiding things like divestment, which might not make any difference to the climate, and are instead wielding their influence over corporate strategy and executive compensation. And as voters, they are lobbying for governments to take the direct, comprehensive and sometimes blunt actions that only governments can take – such as the implementation of a transparent and universal penalty for emitting greenhouse gases and making sure that the revenue derived is redistributed equitably across society.

This range of different actions all add up to one thing: delivery. The real-world delivery of climate solutions has long been a preoccupation of mine, whether as CEO of BP or, more recently, as co-founder of BeyondNetZero, a climate growth equity venture with General Atlantic. I know how difficult the decisions can be when there are trade-offs to be made between important ESG commitments and healthy profits. But in the end, it comes down to the conviction that the right thing to do in the short term will, ultimately, pay off in the long term. That is the essence of business’s contract with society. And it is essential if we are to build a sustainable future for the planet on which we all depend.

This commentary does not constitute an offer to sell any securities or the solicitation of an offer to purchase any securities. This commentary discusses broad market, industry or sector trends, or other general economic, market or political conditions and has not been provided in a fiduciary capacity under ERISA and should not be construed as research, investment advice, or any investment recommendation. Past performance is not necessarily indicative of future performance.